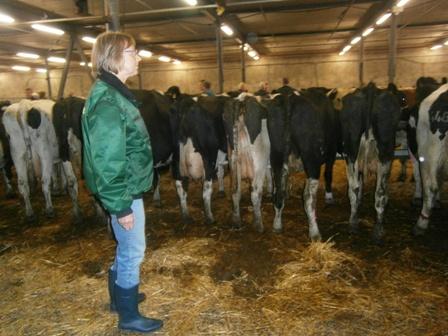 Eyes on Animals inspectors paid an unannounced visit to the cull-cow market in Leeuwarden early this morning. There were over 400 cows today. There was a lot of bedding (straw)  for the animals. There were pens in which the cows could be housed loosely and all the animals have access to water. Today it was what the market managers call  ‘fathers’ day’  because bulls are also present at the market on the last Thursday of each month. Cows can only go directly to slaughterhouses on this day too, not to a farm for further production. For each of the approximately 20 bulls there was an individual pen, to avoid any fighting or mounting behaviour that can risk injury.

We saw a cow lying on the ground in an awkward position. When we paid attention to this, some people tried to get her up by using sticks. There was no hitting and it wasn’t done in an aggressive manner. She did not get up, even when a cow next to her peed on her and stood on her. According to bystanders, this cow stood normally at the beginning of the market. We asked for the vet. He had just left. The market manager called him and he returned to the market. In the meantime though the cow stood back up. The vet concluded she had to be transported to the slaughterhouse separately, in a trailer. He made a round with us on the market and explained some things. There were a few cows with dripping or full udders. A milk machine was used at the beginning and end of the market to milk the cows. We would like to thank the market managers and the vet for their hospitality and being responsible. In general the conditions are acceptable and well organized.
We did however notice many people were smoking inside the market hall where the animals and straw bedding are. Even though there is a sprinkler installation, we would like smoking to be limited to outside the hall or only in the café above, because of the fire hazards. 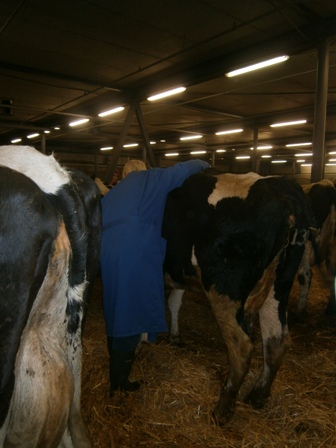 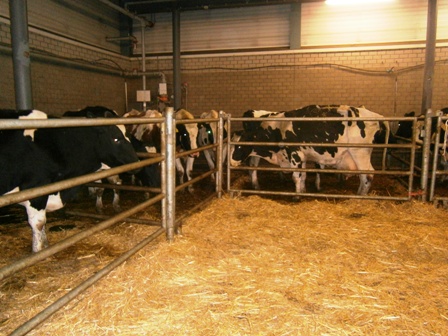