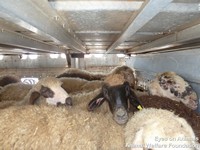 This morning we held a meeting with the Head of Customs and Head Veterinarian at the border. They both agreed that it was in the interest of the animals and of them that the animal trucks get processed as quickly as possible. The Turkish veterinarians now work longer hours and can be called at night if necessary. They also hope that within 10 months there will be a special place better suited for the livestock trucks to park inside the border, with a stall so there is the opportunity to unload animals too. We explained that in the meantime there is still the urgent need for more water sources where the animal trucks now wait, so the drivers can give their animals something to drink more often. The Chief of Customs agreed, made a quick phone call, and said that within a couple of days there will be 3 more hoses installed. 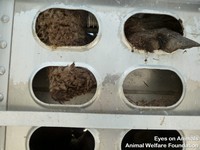 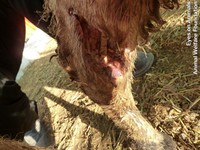 The rest of today was a very sad day at the border. After observing relatively good sheep transports yesterday, today came as a big disappointment. Two livestock trucks from the company Maria Livestock Express (Bulgarian) had been approved by the Bulgarian export vet and authorities at the Bulgarian border inspection post, despite the trucks and animals inside being in a very bad state. The animals on both trucks were seriously overcowded. The water system on one was not suitably-designed, with nipples placed on the outside, beyond reach of the animals inside. The trucks were old and not designed to protect animals from risk of injury. In fact, these trucks are not accepted in most other EU countries anymore because they are known to cause injuries to the legs of the animals. Both trucks had sheep with broken legs, due to the animals getting their legs trapped between the side wall of the truck and the floor. The suffering these sheep must have felt during the accident, and the hours they were left in this way, is unimaginable. We woke up the driver who grudgingly tried to help us release the legs of two of the sheep. Inside his truck there were also several dead sheep, likely due to the build up of ammonia and lack of space, air and water.

We called the chief Turkish veterinarian at the border to inform him of this suffering. He said he would send the truck to the small stable to be unloaded. When we arrived at the small stable, the private veterinarian (from Saturday) had been called so that the injured sheep could be checked. It still took 5 hours before the sheep passed the inside-border checks and could finally unload. 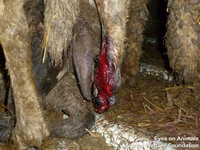 The drivers were rough with the sheep; pushing them off and dragging them by their legs or pulling them by their ears. We called the transport company and insisted they fire these drivers. We will remain in contact with them to be sure they take responsibility for this suffering and put guidelines in place for driver conduct.

Many sheep fell down the steep unloading ramp, others tried to walk off but then collapsed. The veterinarian and workers of the stable identified the injured and sick ones and treated them as best as they could. We were told that they will all rest overnight, get some feed and a bit of water and the injured sheep will not be reloaded. 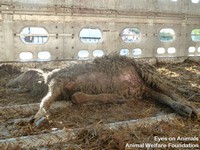 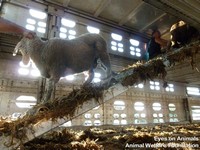 We would like to thank the Turkish chief veterinarian at the border and the workers of the stable for acting professionally and taking action to limit further suffering of these poor sheep. The private veterinarian also did a terrific job and had a heart for animals.

We immediately alerted the Bulgarian authorities at the border to be more thorough in their checks for injured sheep and will send a more detailed complaint out to the transport company and Bulgarian and EU authorities as soon as we are back. 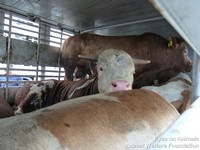 Inside the border we also checked on several other trucks: Hunland carrying young calves (!- these animals need milk. We find it crazy that such fragile and young animals are being sent on long distance transports via this risky border crossing), “slaughter” bulls and sheep. Among them a truck from the Dutch/German company Keus en Mollink. We were very happy to see that the “slaughter” bulls inside and the truck were in much better shape then last they were last year by this company. The straw bedding was quite wet on the upper floor, but on the lower floor still dry and plentiful. The drivers had filled the water tank and the animals were drinking when we arrived. The drivers were also very cooperative and, when we made a suggestion to clean out one of the automatic water bowls that was dirty, did so right away. Nevertheless, they only had 3 small manual water buckets with them, we will ask their boss to equipe this truck with more.