Home » Our inspections » transport » Meeting with Turkish Ministry of Agriculture 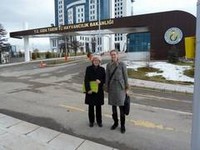 This afternoon Eyes on Animals and Animal Welfare Foundation held a meeting with 4 officials from the Turkish Ministry of Agriculture, including the Head of Animals and Animal Products Border Inspections. We have been sending our reports to this Ministry since our very first visit to Turkey and were eager to meet them in person. They agree with our reports and our concerns. For this reason they have started taking measures to improve the situation. We informed them of our latest observations and offered help where we could.

We were very pleased to hear from them that they are trying to arrange that the border be open 24/7 for livestock trucks, so that paperwork and animal health checks can be processed quickly without long delays. They also have plans to build a large “control post”(official stable to unload animals) according to EU standards. Since this will cost a lot of money, it will take some time. In the meanwhile they will make use of the new stable at the border plus several other private properties in the area to unload animals that are blocked at the border. They are also going to train officials and stakeholders in the region around the border on animal- welfare during transport and the EU transport laws, which will come into enforcement in Turkey in 2013. They have also stopped taking blood samples from animals at the border and are doing this only at the place of destination.

We thanked them for these important steps and encouraged specific further improvements. We also promised that we will do what we can to improve the situation on the EU side, as still far too many EU exporters are not respecting Turkish technical import requirements. As well, in the past EU exporters have cheated on the ear tag system, using the same ear tags twice which was the primary reason for causing these delays and extra health and blood checks. We look forward to future collaboration and will continue visiting the border and reporting on our observations to them.