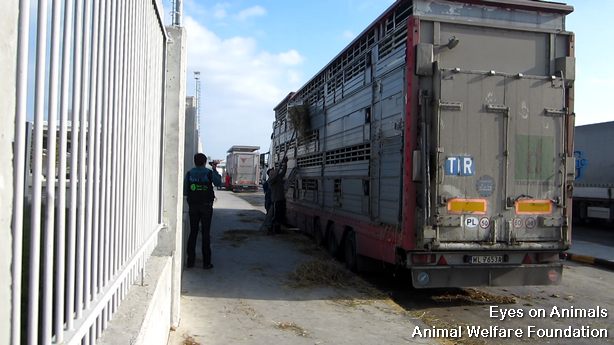 A team from Eyes on Animals and Animal Welfare Foundation is checking on EU livestock trucks trying to enter Turkey at the Bulgarian/Turkey border. Since early Saturday the 24rd of November, a livestock truck from the Polish transport company ANIMEX is waiting. On board are bulls that were loaded already on the 20th in Latvia! The transporter and exporter want to bring them via Turkey to Iraq to be slaughtered, on a journey of 4600km! However, they are not allowed as this trade route is not open and they do not even have the documents needed to cross Turkey. Why they even tried or thought they could, is unknown. Their attempt has lead to suffering as the animals are stuck now on board since days and no solution is in sight. They are not allowed to return to the Bulgarian side, due to fear of spreading disease nor are they allowed to enter Turkey. Our team is keeping an eye on them and checking that the drivers regularly give the animals hay and water. We are writing to all authorities, at the border and at the EU level, plus the UECBV, insisting that they take action to put an end to this chaos. The animals need to be unloaded as soon as possible. After 2 years of us reporting on animal- welfare problems at this border, it is unbelievable that an emergency action plan, and infrastucture is still not in place by the EU to avoid such chaos.