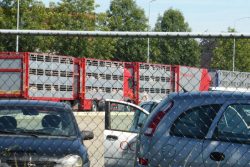 On the 24th and 25th of August, during a heatwave, Eyes on Animals arrived unannounced at the entrance of VION, a large slaughterhouse in Boxtel, The Netherlands, in order to inspect the truckloads of pigs arriving. The aim of the inspections was to check whether the new Heat Plan Protocol, written by Vee & Logistiek, was having an effect in practice. The Heat Plan is to be put into practice when the weather forecast shows that temperatures will reach 27 degrees Celsius over 4 consecutive days or when one day will reach 30 degrees or more. In the protocol extra measures are recommended during hot days, such as loading 10-20% fewer pigs. The EonA-team focussed on the number of animals loaded, the temperature inside the trucks, the condition of the pigs and the automatic fans built in the trucks. We checked on roughly 30 trucks.

Unfortunately the Heat Plan has not brought adequate relief for these pigs. The majority of the pigs we found in the trucks were suffering from heat stress. We saw foam around the mouths, sometimes vomit, wide open mouths and rapid breathing, red blotches on heads and bodies, apathy, all caused by the extreme heat in the trucks. The lowest temperature we measured was 29 * Celsius, the highest 45* Celsius. Most trucks had an inside temperature of 35 to 38 Celsius.

Many pigs were severely dehydrated: on these transports animals are not provided with water because they are considered short distance rides and the pigs are to arrive with empty stomachs. Some pigs that still had some energy tried to climb over the others in search of water. They were licking the metal bars. Dozens of pig trucks arrive at the gates of this slaughterhouse every day. On the first day, almost none of the transporters had decreased the loading density by 10 to 20% as advised in the Heat Protocol. In some trucks the fans weren’t even working, due to bad maintenance or indifference. There is no shade in the parking lot of Vion, so several trucks had no choice but to wait in the blazing sun. The pavement under the trucks was hosed down in order to cool the vehicles a little bit and at the head of the queue there were mobile industrial-sized fans, but they were insufficient in this heatwave. Most of the trucks that arrived were sent off to look for a place in the shade and the drivers were called on their cellphones when their turn was up, but even in the shade the temperatures rose to 35 degrees. On the second day most of the transporters had at least reduced their load to 90 % and had working fans on board. Also the logistics seemed a bit better coordinated than the day before. We are quite sure that this was due to the fact that media had exposed the inspections from Day 1 on TV and in print and we had communicated our concern with Vee & Logistiek about the current conditions, asking them to remind all their members to decrease the load. On both days of our inspections the government inspectors from NVWA were present at the entrance. They checked on the fans and the number of pigs on board. They handed out warnings to those that arrived with too high loading densities, or broken fans. As usual we will write a report of our findings and will send it to all parties concerned to assist in further solving this problem.