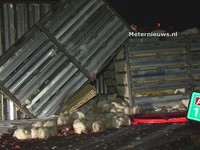 Today we dropped by Boonstra transport, the company that sadly had an accident with one of their poultry trucks a few weeks ago. To watch the footage click HERE. Fortunately their driver has recovered. However, 60-70% of the poultry on board (6-week old broiler chickens) died. The main cause was suffocation, because when the truck kilted over on its side, the chickens all piled on top of each other in their crates. Boonstra heard the news of the accident and immediately sent a team of professional chicken catchers to the site. They were able to do this only because the accident took place close-by. Had it been further away, it would have not been possible to be at the scene so quickly. Nevertheless, because of the design of the containers and crates for poultry, it remained difficult for the workers to release all the chickens. We were told that these professionals, once they were able to access the birds in the crates, dislocated the necks of all birds that were seriously injured and in pain in order to put them out of their misery. The birds that were in an acceptable condition were reloaded and sent to a slaughterhouse 30 minutes away.

Eyes on Animals has filed an enforcement request with the minister of farming, nature, and food … END_OF_DOCUMENT_TOKEN_TO_BE_REPLACED