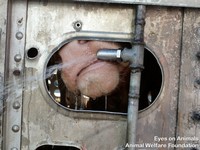 Today the team from Eyes on Animals and Animal Welfare Foundation checked on 8 trucks bringing live animals from Europe into Turkey for slaughter and further fattening. A Croatian truck, from the company Sazov, had Austrian calves on board. The organizer was Viehandel Kara from Bad Voslau, Austria. The drivers did not unload the young calves (approximately 4 months old) at all during the entire journey from Austria to the Turkish border, stating that they “only” needed 27 hours to get to the border and thus were still within the EU 29-hour limit. This is unprofessional as they know full well waiting times at the border can be extremely long. By the time these calves had been cleared of all border checks, the young animals had been left on board for over 48 hours! 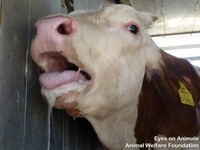 Aggravating the situation, one calf had injured his leg and was sick. We had a veterinarian come to check on his leg and give him medicine. We will send a complaint to all the pertinent authorities about this truck keeping young calves on board for so long. 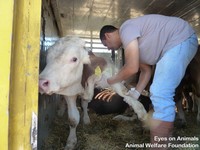 A Bulgarian truck had one dead sheep on it, likely due to the heat stress. A few of the drivers made an effort to care for their animals properly, feeding and watering them correctly. Nevertheless the problem remains that while animals are waiting for the paper work to be cleared on the Turkish side, they are left on trucks parked in the direct sun. 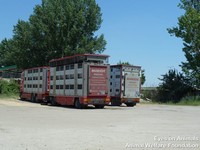 The small stable at Petline is not big enough to accomodate all the animals arriving at the same time, or the transporters are not willing to pay the fee to have them properly rested there during the wait. Today most of the trucks had to wait between 5 and 24 hours (for those arriving yesterday evening after the Turkish veterinarians stopped working) to clear the Turkish inspections. During temperatures of 35 degrees, this causes serious suffering from heat-stress.

On a positive note, Petline has expanded since our last visit, they now have 5 outdoor paddocks and 2 inside, plus they have built a roof to create shade for the sheep. Today we were in discussion with the owners and Turkish veterinarian authorities about how to make further improvements.

As well, the stable we saw being built across the road back in February is now finished and today received its official permission to also start receiving animals.