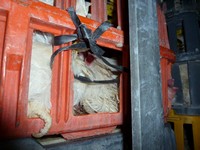 We paid an unexpected visit to the slaughterhouse Wilki in , which specializes in the slaughter of spent laying hens. The director welcomed us to his company. Eyes on Animals inspectors have inspected a dozen of chicken trucks owned by this slaughterhouse over the last year and made a report about their observations. They observed hens being transported in old and damaged crates, often repaired provisionally with wire. Several hens had their wings stuck in the crate-openings, crushing them, and there were also dead and seriously injured chickens. The openings to the transport crates are only located on the top of the crates, therefore after loading there is no access to the animals. If chickens are injured or stuck or in case of an accident the chickens cannot be helped during transport; they are prisoners to their own crates. In certain cases we observed hens being transported without protection against the cold and wind.

The director did not recognise his trucks in the photos of our report. He claimed the chickens are protected from the cold with the use of side-tarps during transport; we were shown a form with guidelines and instructions for transporters about this. According to him all damaged crates are destroyed and replaced by new ones and never repaired provisionally. It could happen that other people do this, but such crates are destroyed immediately at the slaughterhouse.

The director says he is open to suggestions for improvement, but he doesn’t believe in easy solutions, certainly because replacing all crates at the same time would be too big an investment and the company would have to be adjusted to crates with different measurements. On top of that he is not convinced that other crates would improve things.

The director and the veterinarian showed us around at the slaughterhouse, where about 80.000 chickens a day are slaughtered. We were not allowed to take photos and videos. We didn’t notice any crates that were repaired with wire, but we did see crates of which plastic parts were damaged. The veterinarian told us that the construction of the bottom of the crates is not solid enough. With a large stick and pin crates are moved by transporters, which causes them to break and get damaged. The director promised to contact the manufacturer about this problem to ask whether the bottom parts of the crates can be made stronger. He said he had already ordered new crates, but the new crates were not there yet at the moment of our visit.

Whereas the director doesn’t see lots of opportunities for improving the crates, he does see room for improvement when it comes to loading of the chickens. Bad chicken-catching teams get feedback from his company and good catching teams are recommended to farmers, but no action is taken against bad catching teams. He feels the responsibility for this lies with the authorities and he does not see possibilities for refusing badly loaded chickens. Eyes on Animals will receive information from him on bad catching teams. Despite his reservations about improving the crates the director is willing to brainstorm about making changes. We thank him for the welcome at his company.