Today the team from Eyes on Animals and Animal Welfare Foundation continued to check on EU livestock trucks arriving into Kapikule, the Turkish side of the Turkish/ Bulgarian border. To start with the good news:  today the authorities here have decided to stop taking blood samples at the border of the animals! This process created extra delays and stress for the animals in transit, and thus we are very relieved that it has stopped. Instead they will take blood samples at the place of destination.  As well, we finally received permission to see the stable and watch the unloading of some of the animal trucks there. The stable is very small, but it offers the animals feed and it provides them with an opportuntiy to stretch their legs and even rest a little. There are plans to expand this stall so that there is more room to accommodate more animals. 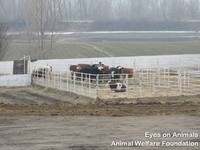 Unfortunately the Turkish authorities say that they cannot yet legally force transporters to unload their animals here, so some decide to avoid paying the fee and instead leave the animals to wait on board. 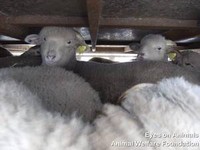 We would like to see in the future that all animals blocked for long periods be unloaded. This will be particularly important when the summer arrives, as temperatures reach 45 degrees here.
Unfortunately a Polish truck with young bulls from Estonia (2800km away from the border!) has been blocked by customs inside the border since 5 days and must wait in No Man’s Land. Apparently the young bulls do not meet the weight requirements and thus cannot be accepted into Turkey. We are told that the owner is on his way to the border to settle things.
We also check on two trucks from the Bulgarian company Maria, that have sheep on board. Unfortunately they are loaded on 4 decks. Because most of the sheep are young lambs, their heads and backs do not yet touch the ceiling, nevertheless the headspace and air circulation is limited, particularly on the upper two deks.

And the Greek truck from the company Hellas that we observed yesterday, is still here. The owner of the stable explains that this transport company did not unload the animals at the stable because of the fee, but fed them on board. Apparently he is blocked because the payment for the animals has not yet been fully made.