Today was our third day checking on animal trucks coming from the EU into Turkey. A Lithuanian truck with young bulls, on a journey of at least 2300 km, arrived on the Turkish side of the border in the morning. The bedding was very filthy. The truck made a short stop at the Veterinarian Station where 5% of the animals were to have their blood drawn to be tested for diseases. After this short stop the filthy truck continued towards its (unknown) destination. 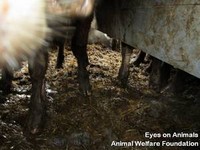 Later in the afternoon we observe the three Keus en Mollink trucks (organized by Klompjan), that had been blocked for 2.5 days at the border due to a bureaucratic problem, finally leave. It is very unfortunate that the pregnant cattle had to remain on board unnecessarily for an extra 2.5 days, but we do acknowledge that the drivers at least took good care of the animals during the whole delay. 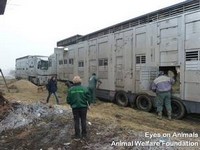 We also observe a truck from the Greek company Loukas with Greek sheep arrive and park on the side of the road. It will have to wait here until tomorrow morning, when customs re-open. The animals make a very thirsty and hungry impression, licking and biting the bars on the side of the truck repeatedly.

But the good news is that it seems that trucks transporting sheep on 4-levels are no longer being tolerated, as this truck is only loaded on 3 levels and people working at the border says they have not seen 4-levels since January 1st, 2012. The Bulgarian Ministry had informed us that they had sharpened their inspections at this border crossing so possibly some things are getting better on the ground. The sheep on board the 3-level Greek truck thus had plenty of headspace and better air-circulation. 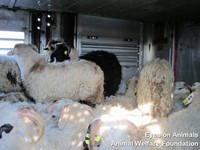 Another change at the border is that there is a little stall on the Turkish side where some animals that are blocked for days are now being unloaded into. In general this is an improvement but unfortunately we do not know if this stall is good or not, or how the animals are handled there, as until now we have not been allowed to visit it.

Eyes on Animals has filed an enforcement request with the minister of farming, nature, and food … END_OF_DOCUMENT_TOKEN_TO_BE_REPLACED