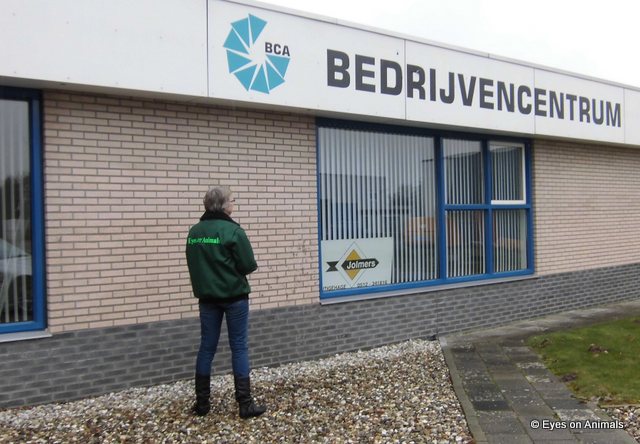 Two Eyes on Animals inpectors had an appointment today with Mr. Jolmers of Jolmers ADR training centre in Surhuisterveen (NL). Among other things Jolmers provides trainings to chicken chauffeurs. Chauffeurs who transport chickens take part in a one-day course about EU regulation 1/2005 and do an exam afterwards.

Animal welfare is an important part of the course. Drivers often encounter difficult situations in the field. When they transport chickens, they are responsible for the welfare of the animals. They risk getting high fines when the transport is not how it should be. However, the problems arise during the catching and loading process. Chickens are often caught and put in crates in a rough manner, which causes tremendous suffering. When the driver arrives, the chickens have already been loaded. The drivers are bothered by what they see, Jolmers tells us, but can’t do a lot. Refusing to transport the chickens would have too serious consequences for the relationship with the employer, customer and slaughter house, thus the driver has no choice but to transport the badly loaded animals and can only provide help to chickens he can access. (The problem of course is that once the chickens are loaded, the crates do not have any access doors so injured and suffering birds are completely helpless and there is nothing the drivers can do. Eyes on Animals has been campaigning for over a year now for the chicken transport industry to design a crate that fulfills the EU requirement of providing access and is insisting that the EU authorities start enforcing this better!)

Eyes on Animals agrees with Mr. Jolmers that the nVWA should better check the places where the problems arise, the catching teams, instead of only during and after transport. Mr. Jolmers will include some of our photos of bad circumstances during chicken transports in his training. He will also mention Eyes on Animals, so that chauffeurs can contact us, for instance when they come across a poignant situation. Eyes on Animals thinks it important to be in the know as much as possible about situations in the field and experiences of people from the chicken industry. We thank Mr. Jolmers for his detailed explanation of his training and experiences and his willingness to mention our organization and work to the chauffeurs he trains.

Eyes on Animals has filed an enforcement request with the minister of farming, nature, and food … END_OF_DOCUMENT_TOKEN_TO_BE_REPLACED