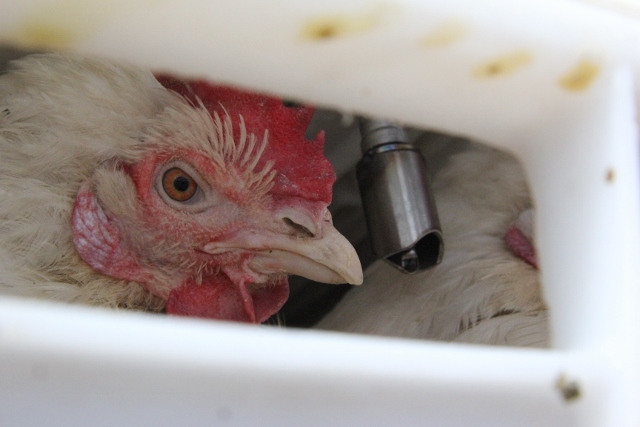 Today we had an appointment at (truck) auto body specialist Van Ravenhorst with its director Dick van Ravenhorst and Rene van den Berg from Van den Berg Poultry. They explained how the automatic water system in poultry trucks works and we discussed animal welfare regarding poultry transportation.

A month ago we followed a Van den Berg Poultry truck from a farm in the Netherlands to a slaughterhouse in Poland, which was a 12.5 hour drive. There was no water supply (for the chickens). Poultry that are exported on journeys lasting more than 12 hours (including waiting time at the slaughterhouse) should have access to drinking water. Once arriving at the Polish slaughterhouse, many of the birds were left another 4 hours before being taken out of their crates, so this amounted to 16.5 hours for some. This is in violation of the law.
Van den Berg has a truck with water system on order, which is going to be used in the future when his company exports poultry to Poland so that they can abide by the law.

The carrosserie Van Ravenhorst has developed an automatice water system for poultry trucks that can be used for water as well as liquid food. Most poultry buyers/traders have ordered trucks with a drinking water system and these trucks have also been exported to Poland. Eyes on Animals hopes the poultry sector will also use water supply systems on shorter distances, especially in the summer when the birds can easily become dehydrated and overheated.

We would like to thank Van Ravenhorst and Van den Berg for their friendly reception and openness about their jobs and their opinions regarding animal welfare during the transport of poultry. Eyes on Animals will continue to plead for crates and containers whereby access to the animals is easier and also for more ventilation in trucks, but for the time being at least some birds are getting water now during long journeys, something that was often ignored in the past.