Today a team from Eyes on Animals and Animal Welfare Foundation dropped by, unannounced, to the Hungarian control post “Vet Express”, located roughly 2km from the Romanian border. Many cattle from, for example, Lithuania, Czech Republic, Slovenia, and Germany are unloaded here during their long journeys to fattening farms and slaughterhouses in Turkey.

We observed a Polish truck from the company ANIMEX carrying Lithuanian calves for Turkey that had unloaded earlier in the morning at this control post. The calves were all housed inside the post’s stable. In one pen, almost all of the calves were lying down and behaved lethargically. One was even dead. It was obvious they were tired from their journey from Lithuania. The others were standing and eating. We were shocked to hear that the drivers were planning on leaving tomorrow morning for Turkey, considering the inland Turkish custom agents would not be working until middle of next week – the animals would end up being blocked on board for days in very hot temperatures to wait for Ramadam to end! We expressed this concern, but were told they will bring extra feed and bedding, which is not a suitable back-up plan nor legal. 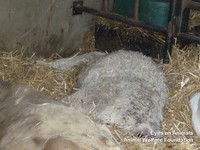 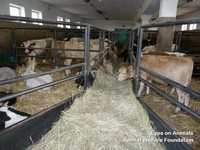 Despite sending a fax to the owner of Animex insisting that he leave the animals to rest at a control post in the EU before heading to Turkey, early on the 18th of August, we observed the drivers reload these young animals and head off towards Turkey. We have been in touch with our contacts at the Bulgarian/Turkish border and this truck did not arrive until four days later, on the 21st. It still has 1200km (16 hours) once it passes the Bulgarian/Turkish border. This is a very sad situation for the animals, being forced on such a long and poorly planned journey with extra delays in extreme temperatures. We are in touch with the authorities and the EU about this case. A full report and official complaint will be sent in. 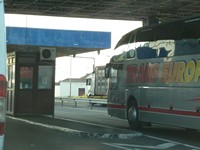