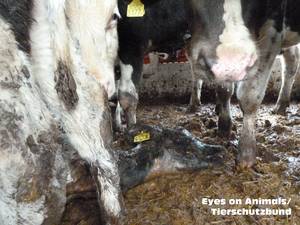 After receiving information that a cattle truck had been blocked for several days at the Bulgarian/Turkish border, we joined forces with Tierschutzbund Zurich and sent a team to the border for 4 days to see how grave the problems were there for the animals forced to wait. When we arrived, the truck had managed to get through but dozens of others were in the line-up. Some had to wait for 4 days. Many of the German trucks that had loaded breeding heifers in Austria were in alright condition- the drivers had placed a thick layer of straw bedding for the animals to keep them clean, kept the loading density low so all animals could reach the water troughs and lay down, and had brought extra hay. However, a Dutch platted truck with young Hungarian bulls was in horrible condition with one animal already dead on board. The truck did not have an automatic water system on the first floor (which is a requirement for long-distance transport!) and the bedding was soaking wet and dripping out from the sides of the vehicle. The drivers only had brought with them 2 manual troughs to attach on the side of the truck to fill with approx 10 litres of water, leaving many cattle unable to reach them and not providing even those able to reach them with enough water. Several Lithuanian trucks were also in very poor condition- the Lithuanian cattle had already endured an 80 hours journey and conditions on board were filthy with faeces splattered in the water troughs and all over the inside walls. The thin layer of bedding stunk of ammonia and was very wet. The Bulgarian sheep trucks were seriously overcrowded, without any bedding or water, and completely inadequate headspace with many dead animals on boad. Some sheep had their tail and legs stuck between the floor and side walls causing pain and panic.

We are currently writing complaints and sending the photos and footage out to the EU and pertinent Member State authorities. Obviously the inspections of animal transports at the places of departure within the EU as well as at the Bulgarian side of this border are extremely poor and incomplete, transport companies are disrespecting the law and the border is not managed properly to handle live “stock”.

watch here for the documentary with English subtitles broadcasted by RNW.