Today was a disappointing day.

We returned to the slaughterhouse in Gönen that we visited in June to find out that nothing at all had been improved on. The Manager that we had spoken to back in June no longer worked there. The new manager agreed to meet with us and admitted he did not know about our report or letters of recommendations. 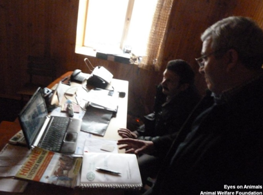 Nevertheless, he seemed really interested in all the designs we showed him from our book by Dr. Temple Grandin, as well as better examples of fencing, anti-slip flooring, and other installations we had taken photos of at better-designed slaughterhouses.

We showed him the footage we took of his plant in June and he was uncomfortable seeing how the workers pulled out a bull so fast that he fell and got dragged on his knees, and a downer cow that arrived and was repeatedly electric prodded, and another worker that twisted the tail of the bulls to make them enter the kill-box. 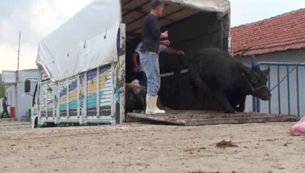 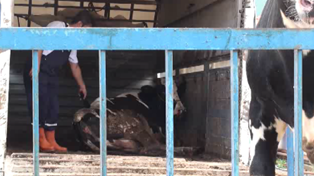 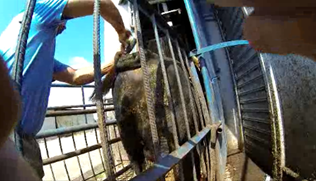 The manager said he would consider making some improvements. He did not know that such small changes to the design could better suit animal behaviour and welfare. We encouraged him to start right away and even offered our help (which he denied because it would shame him to make us work for him voluntarily).

The only piece of good news was that he claimed that the plant had already ordered a restraining box to avoid having to hoist the cattle by one leg. It will not be available for another 6 months though.

In the meantime we will stay in communication with this man to encourage as much as possible that he takes concrete steps to improve the plant quickly. We will also discuss these problems with the Ministry Official later this week and we will send our report plus a letter of complaint to RIMDES for giving out their Halal certification far too easily. What worth is the Halal certificate when so many Halal rules are broken in this plant?

Eyes on Animals has filed an enforcement request with the minister of farming, nature, and food … END_OF_DOCUMENT_TOKEN_TO_BE_REPLACED