Today the EonA/AWF team met with the Plant manager, Quality Assurance Superviser and Veterinarian from Kayarlar slaughterhouse in Bursa-Gürsu.

We had seen footage of how they slaughter cattle inside their plant and, like most other plants in turkey, here too bovines were being made to fall in trip-floor slaughter boxes and then hoisted alive by one leg. The plant manager and veterinarian admitted this to us and agreed things could be better. 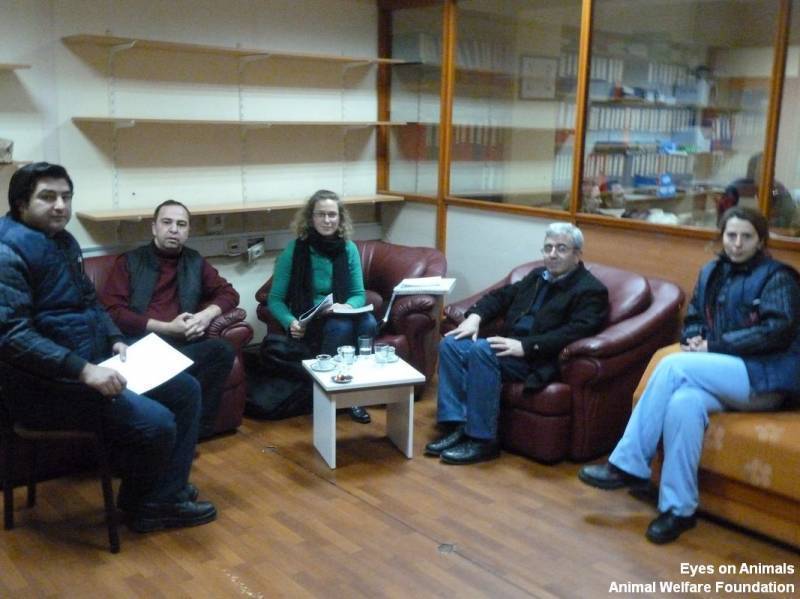 They produce meat for Namet, and have Gimdes certification. They have two slaughterhouses in Turkey. The other one is in Ufer and has a rotating restraint box. This type of restraining box is also criticized as cattle are forced to be on their backs which is an unnatural position for them and after the cut blood can go back into their lungs.

Nevertheless, some veterinarians and scientists insist that it is still much better than hoisting them by one leg alive and thus is a step in the right direction. Dr. Temple Grandin and other animal experts recommend the ASPCA pen-where animals are kept upright and have a belly lift.

They want to also invest in a better restraining box, but it does not make sense to do so yet as plans are to close down this building and build a much more modern plant further outside of Bursa in the summer. The plant manager used to work in a plant in Belgium thus knows that better equipment exists that is welfare friendlier, he has seen it is practice and he will order it once they move.

They used to receive animals from abroad, including Europe and Australia. But now they only buy local as currently no slaughter animals are coming over. We looked at Dr. Temple Grandin’s designs and discussed “kieserling”anti-slip flooring from Germany, which the Plant Manager was familiar with. We also showed him footage of a “good” Halal sheep plant in Switerland that used electric stunning and behavior techniques such as movement of animals from dark to light and horrible footage from Elif slaughterhouse in Tuzla.

They then showed us the design plans of a slaughterhouse in Konja that they think are really good- there are no sharp angles in the raceway, there is an emergency killing area for injured animals in pain, there are anti-mounting devices to avoid bulls jumping on each other and causing injuries, there are rotating restraint boxes etc… 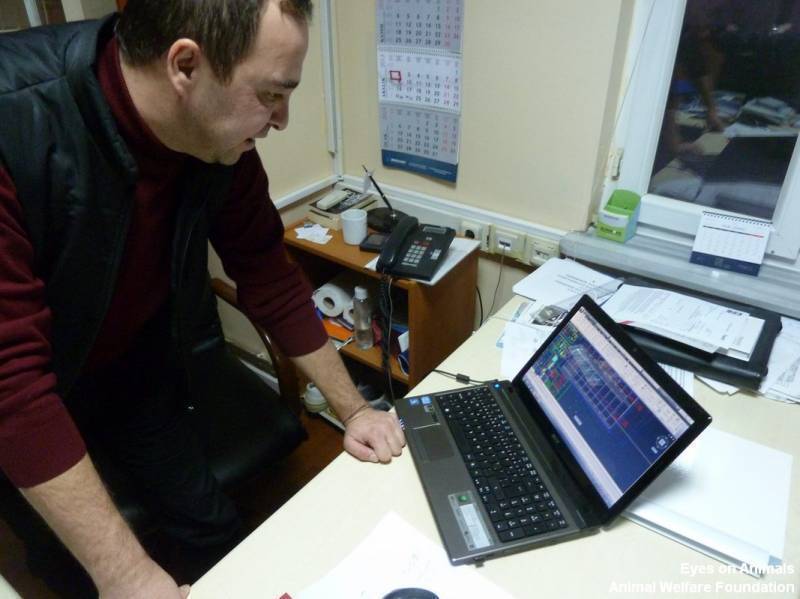 Plant manager explaining to us why the design
of a different new plant is good for welfare.

We will remain in contact with this plant and continue to feed them scientific and practical information so that they can take steps to reduce suffering in their new plant. We will re-visit them in the near future.

Eyes on Animals has filed an enforcement request with the minister of farming, nature, and food … END_OF_DOCUMENT_TOKEN_TO_BE_REPLACED