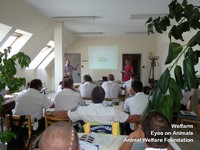 EonA together with AWF and our Hungarian colleagues at Welfarm gave a training to Hungarian police officers posted near the border with Slovakia (Rajka). Here many livestock trucks from northern and western parts of Europe pass on their way to south-eastern countries, particularly those hoping to avoid the strict and frequent inspections found in Austria.   The aim of these trainings is so that the Hungarian police can learn how to enforce the EU animal-protection-during-transport legislation so that there is a more level playing field and so that the situation for the animals will improve. 17 police officers participated. In the morning we gave the theoretical part of the training and in the afternoon we headed out to the border to stop livestock trucks. 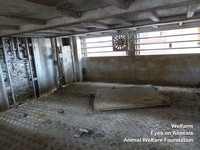 A Hungarian truck transporting pigs from the Czech Republic to a slaughterhouse south of Budapest was stopped. One of the pens on the truck was completely empty (see photo below) because the back door to it was broken, risking animals falling out when the ramp opened. 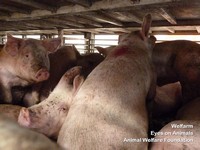 But the driver had still loaded all 200 pigs, despite there being now 15m2 less space available. As a result, the pigs were very overcrowded in several compartments (see photo below). The temperature being 32 degrees aggravated the situation. As the truck would arrive in 2 hours to its destination, the police allowed the truck to continue but are writing a report about the unacceptable loading density and sending it, together with the photos, to the local veterianrian authorities so that steps can be taken by them. The police in Hungary cannot hand out a fine for overcrowding but the official veterinarians can.

Eyes on Animals has filed an enforcement request with the minister of farming, nature, and food … END_OF_DOCUMENT_TOKEN_TO_BE_REPLACED