Home » Our inspections » transport » An Inspection of Poultry Loading 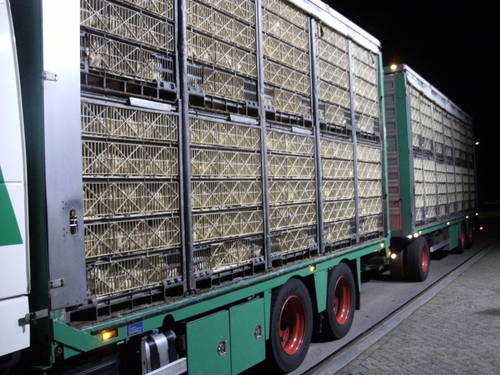 Last night, an Eyes on Animals team inspected the loading of poultry in
transport crates. This event usually occurs at night as the animals are easier to tackle in the dark.

We followed two empty transport trucks which finally stopped at a large chicken barn in the south of the country. The owner was kind enough to allow us to observe the catching of chickens. No photographing was permitted.

This particular company had 100,000 broilers in four sheds. On this night, all of the chicks were collected to go to the slaughterhouse. After a week, there would be a further 100,000 newborn chicks to be fattened for consumption within 6 weeks. 10,000 chicks per hour were caught and put in crates. Catching the chicken was done manually by a company which specializes in this field. The chicks are caught in the dark when they are restful and thus easier to catch. This is likewise in part as they have difficulty standing on their feet, due to their heavy weight. It was just light enough to observe that the catchers gathered 2-3 chicks in each hand by their feet and then crammed them into crates. This was not a gentle process, yet neither were the chicks really harmed. Even so, this must be an extremely painful and stressful experience for these animals. Some chicks seized the moment to escape, but could only get as far as the middle of the barn itself and could not run away. Unfortunately, we were not allowed to take photos. It was a sad sight to see these chicks of 6 weeks old, knowing that after their brief, joyless life in captivity, they would be slaughtered the next morning.

Eyes on Animals has filed an enforcement request with the minister of farming, nature, and food … END_OF_DOCUMENT_TOKEN_TO_BE_REPLACED