When the EonA/AWF team visited this slaughterhouse for the first time in June 2013, we were shocked by the conditions inside.

Not only because the cattle were slipping and being hoisted alive by one leg (which is typical in Turkish slaughterhouses) but because there was so much extra stress and suffering here – the bulls were covered in the blood of previously slaughtered bulls, the animals were forced to take a sharp 90 degree corner from the outdoor raceway into a very darkly lit slaughter box indoors, cattle were getting their legs caught in a dangerous gap between sidewall and floor  and the most shocking was that the man responsible for cutting the throat of the animals was poking their eyeballs to restrain their head. 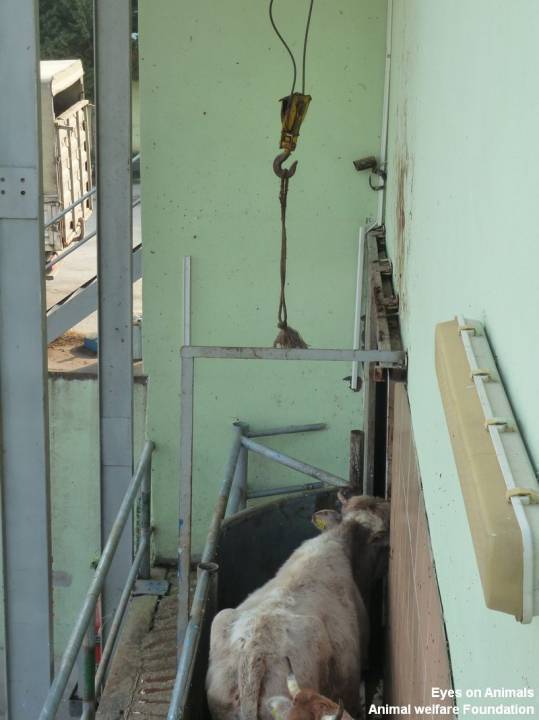 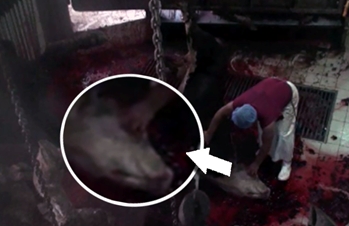 At the time the veterinarian promised to get at least 3 urgent improvements that we suggested into place:

1. Forbid the butcher from poking the eyeballs of the animals;

2. Install more lighting above the slaughterbox so that animals do not panic as much when forced into the dark box;

3. Smoothen the sharp corner so it is a curve rather than a right angle.

We also encouraged that they get a restraint box to put a stop to live hoisting.

The good news is that after they received our report, the managers decided to fire the slaughterer seen poking the eyeballs. We were very relieved to hear this. The veterinarian also managed to convince the Managers to install better lighting above the slaughter-box using animals natural behaviour to walk towards the light. 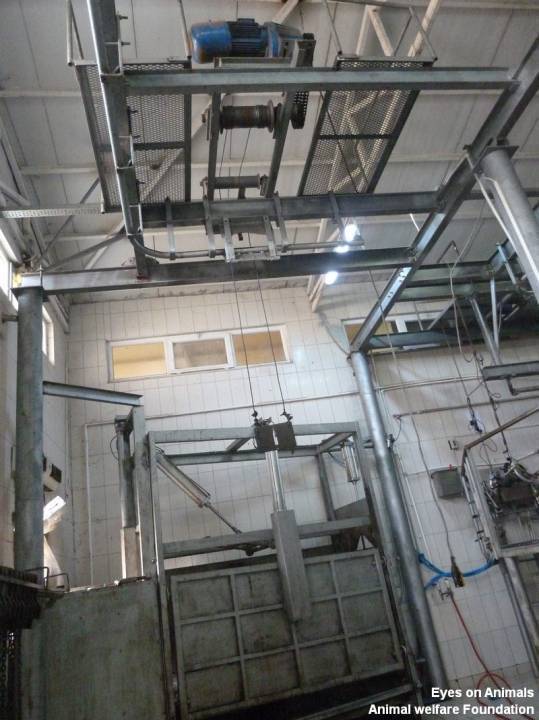 They installed a lamp above box
where animals have to enter

Nevertheless there are still so many design flaws in this plant that pose a risk of injury and cause fright to the animals.

– The gap is still not sealed posing a continued risk of animals getting their legs caught and slipping down, as we saw in June: 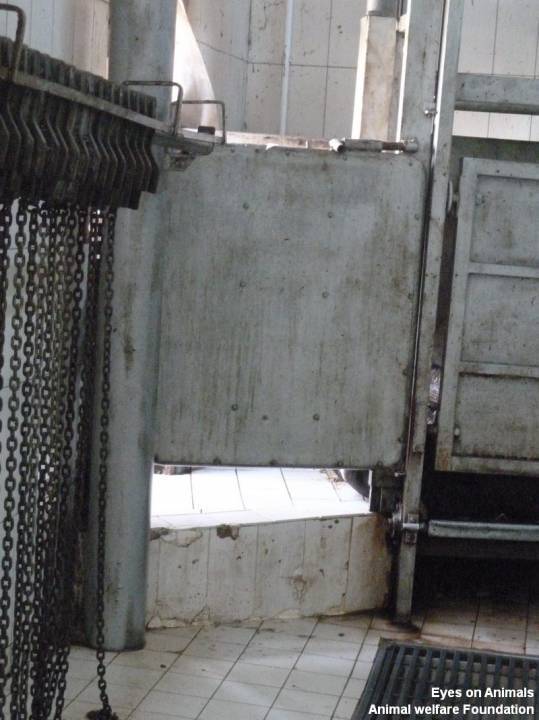 – The corner where animals go from the outdoor raceway into the slaughter box indoors is still too sharp: 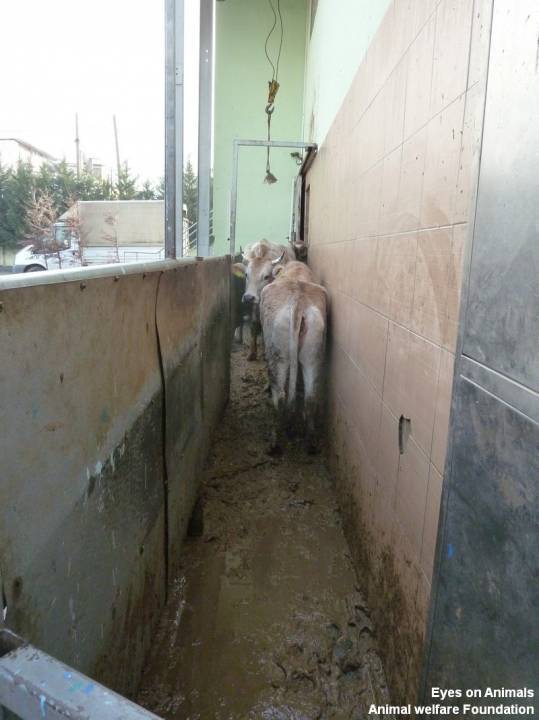 – The animals are still hung by one leg alive…like in most Turkish plants.

During our visit today of the lairages, we noticed another mistake – the fencing is not high enough to prevent cattle from attempting to jump over it. Even when we were there just today there was an incident – one cow had tried to jump it and got her hind legs stuck. 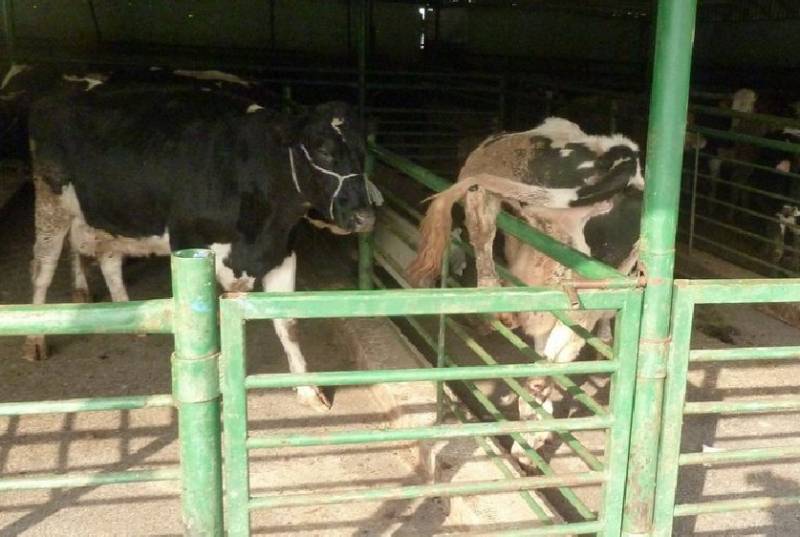 It was horrible to watch and due to her heavy weight on both sides of the fence, there was nothing we or the veterinarian could quickly do to release her. Finally she untangled her legs and fell over on the other side. She stood back up but had pain in her back left leg – not putting pressure on it anymore.

Alarming to think that she would shortly be hoisted by a chain in this condition – in Turkey injured animals are forced to go through the slaughter process. Stunning is not allowed (considered not Halal) to be quickly put out of their misery there where they lay.

We question this decision as suffering is also not allowed according to the Halal rules.

We showed the Veterinarian our footage of other slaughterhouses we have visited that have better welfare-standards for him to get good examples from. We also looked through Temple Grandin’s designs and a catalogue of different restraint-equipment that they should install so that they can stop hoisting the animals by one leg.

Sadly, we have heard that this plant is managed by 5 different people who do not get along or communicate well. That is why it is so hard to get any improvements passed or decisions made. Although the veterinarian agrees with our suggestions, he is limited in his power. 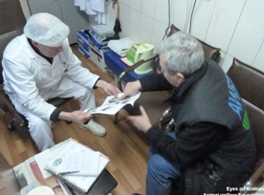 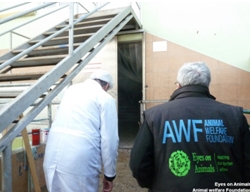 The EonA/AWF attempted to meet with one of the 5 managers but he kept ignoring our phone calls. Finally when we reached him he said we could meet on Sunday the 15th. But as we write this article, on December 15th, he has still not turned on his telephone to confirm when and where.

During our meeting next week with the official from the Ministry of Agriculture responsible for animal-welfare during slaughter in Turkey we will raise the urgency of enforcing improvements at this plant.