Home » Our inspections » other » Meeting with Demeter

Today we held a meeting with a Demeter certifier at the Demeter office in Driebergen. Eyes on Animals is a big supporter of Demeter, as their farmers follow ethical rules such as keeping the calves longer with their mothers on dairy farms, using more robust breeds and not practicing certain painful procedures like de-horning. The purpose of the meeting was to discuss the possibility of spreading the Demeter higher-welfare and environmental standards from the Demeter farms to the transport and eventually also to the slaughter phases of their animals. It was decided that we can provide transport guidelines for Demeter certification and that Demeter would then recommend these, together with transport companies Eyes on Animals is in discussion with, for them to use. We were accompanied by a Dutch livestock driver interested in providing this “ethical transport” service, whereby the animal handling and the quality of the truck would be of a higher standard than provided by the minimal EU norms. We hope this project will flourish and encourage consumers of dairy, egg and meat products to purchase from Demeter, available in natural food stores. 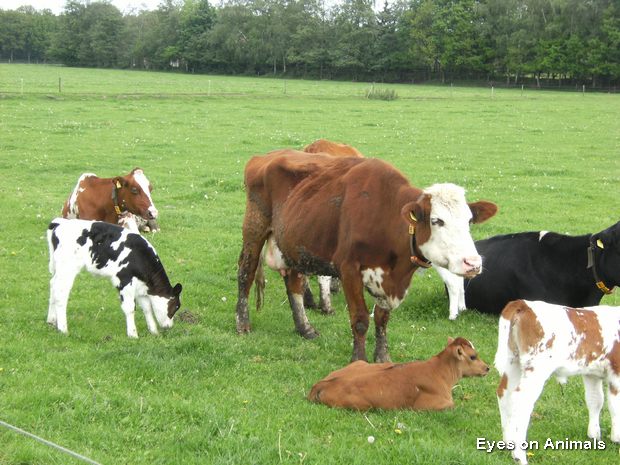 On Demeter dairy farms, calves often stay with
their mothers and live in a natural herd, instead
of being separated right after birth.