In January Eyes on Animals rang the doorbell at the van Rooi slaughterhouse in Helmond, called the main office and wrote emails to get permission to visit their slaughterhouse but to no avail. No one called us back or responded to our emails. 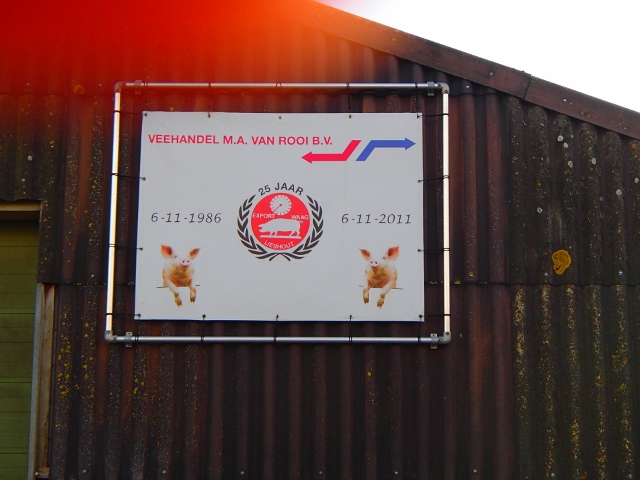 Our director knew Martin van Rooi quite well from previous years, so we found this strange. For this reason, today we dropped by their pig collecting station in Lieshout to try and get some reaction from this company in person. M. van Rooi was called in and he came to the station to meet with us. He apologized saying that messages were not always passed on and he does not do email.

He said we may be able to get permission to visit their slaughterhouse in Helmond but first he had to talk to the NVWA about it. We insisted it was up to him to let us in or not. We told him about our on-going project to improve the welfare of suspect pigs. Suspect pigs are ones that are still fit enough to be legally transported but that are feeling unwell or are slightly injured.

In the Netherlands, these animals sadly are left to wait until the end of the slaughter day so that their carcasses can all be inspected by the NVWA together, and because the plants are nervous about contamination. In many plants they are left on bare and damp concrete floors, often in drafty locations close to the unloading ramp.

He informed us that they are planning on making a small improvement to their pens where the suspect/fragile pigs have to wait.  At the van Rooi plant, apparently water seeps into the suspect pens, but M.van Rooi informs us that they will build a ledge so the water drains away from the pens to keep the floor dry. He insisted they do not need to install floor heating because the warm water from their plant flows underneath already, so the temperature of the concrete floor is already always at 20 – 25 degrees. He cannot give the pigs straw but does put down sawdust.

We will stay in touch with van Rooi to organize a visit of their slaughterhouse.