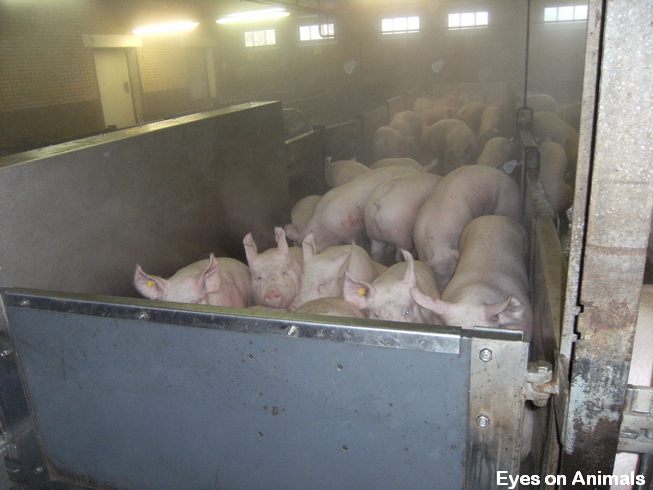 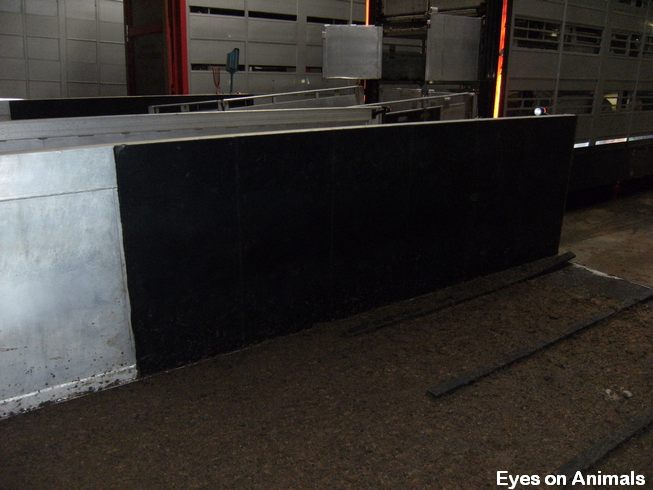 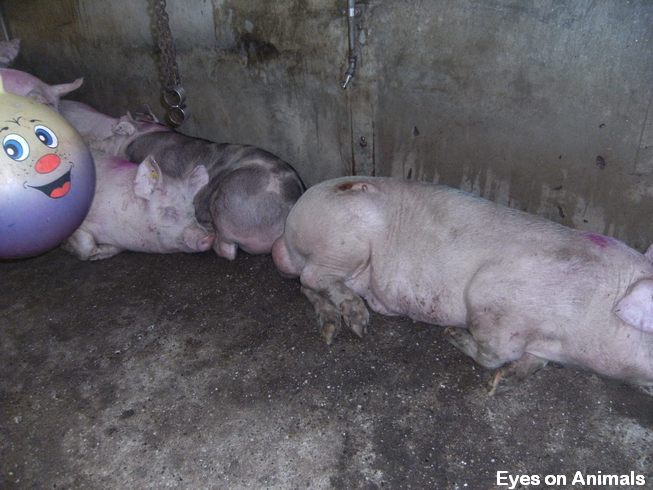 Today we were invited to return to Compaxo pig slaughterhouse in Zevenaar to view some of the welfare-improvements they had put into place since our last visit over 2 years ago when we made various recommendations. Compaxo has now installed extra lighting at the end of the stunning chute, as pigs move better from dark to light, and thus would require less handling to get them to go towards the stunner. Most impressionable was that they have new ramps (made by Berdex) which not only avoid that the pigs ever have to walk out of the truck onto a ramp steeper than 17 degrees, but also the edge is covered in rubber (see photo) reducing the horrible noise that used to be created by the metal doors of the truck banging against the metal ramp. Eyes on Animals is always encouraging slaughterhouses to look at all possibilities to reduce noises, as noise, particularly loud banging of metal, creates stress and fright for animals. They have also redone the pen doors so that the hissing sound which the doors used to make is alleviated. The floor of the pen for suspect pigs (animals which are weak and showing signs of light pain but still legally allowed to be transported) is now heated so the pigs can better stay warm during their wait, which can sadly be up to 12 hours. We encouraged Compaxo to install video camera supervision, as Westfort had done. This normally has a positive impact on the behaviour of the workers, making them more careful with the animals. We also encouraged them to reduce the amount of human handling in the last section of the runway where the pigs are forced to go in single file into the stunning chute- the amount of hitting and banging by the two men often found at this area we thought was too much and unecessary. It did not seem to help move the pigs any faster but just caused more stress. We also found that the condition of the suspect pigs, in particular one that was trembling and had evident serious pain in walking, should have been humanely killed immediately upon unloading and not sent to a pen to wait for hours to be killed. The decision however to accept this pig was made by the government veterinarian (nVWA) present and before that the transport company that sadly agreed to transport her, not Compaxo directly. We told the nVWA veterinarian our concern and he said he would put her down if in 10 minutes she did not show signs of calming down (stop trembling). We would like to thank Compaxo for again being so open and transparent and having such a positive and curious attitude towards how they can further reduce the stress for the pigs being slaughtered in their plant.