Eyes on Animals was present last night at the yearly horse market in Hedel. Fortunately this year there were not any sick animals present. The market was well-organized; there was enough water and hay available and from the beginning of the market onward veterinarians were present. Abuses like we had seen two years ago were out of the question and there was also improvement compared to last year, when there were a few sick animals.

The offloading of the animals went calmly. The atmosphere at the market was open and friendly. Some animals were tied on too shortly, but fortunately in all cases we could address the owner and the animals were then given more leeway. One significant change compared to last year was the addition of a lower bar on the fences so that ponies could be tied on more comfortably. Some of the tied-on horses however put their legs over the lower bar on which the ponies were tied, causing some risk of entanglement. But fortunately tonight all horses were able to put their feet back or got help with doing so. There were two ponies that were not used to being tied on. This caused stress for the animals which would have been better if housed in a pen or not tied on. Unfortunately a number of owners hit the animals with sticks. They did not hit hard, but it is unpleasant for the animals and certainly unnecessary.

Some animals were tied on close to the fair and party tents. Noise is disturbing for these animals, but it luckily 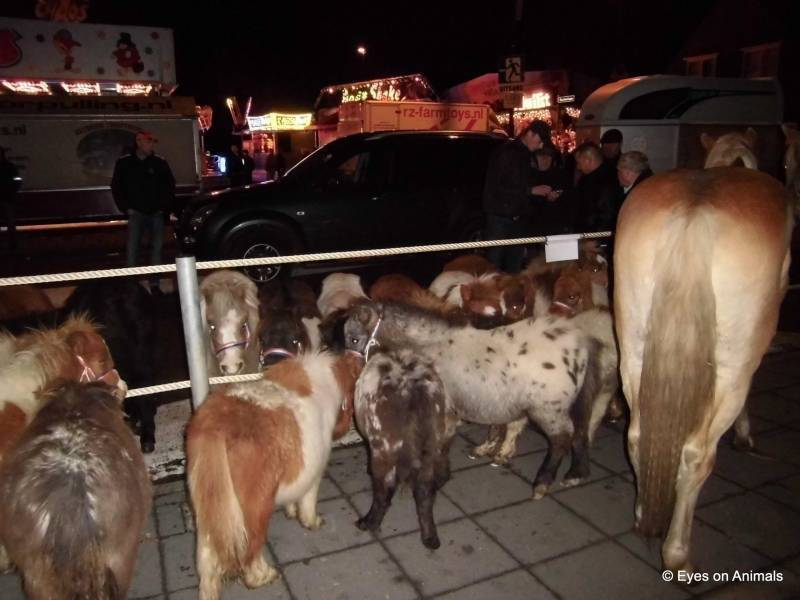 did not cause any serious problems tonight. Many of the equines had a long journey ahead of them to slaughterhouses in Eastern and Southern Europe. We are happy that the market now provides these animals with at least water and feed first.

We thank the organization of the horse market for their hospitality and willingness to work together. We are impressed by the improvements accomplished in a short period of time to further decrease stress for the animals.

Future improvements at this market would be keeping stallions and mares separated far from one another, as well as tying on small ponies and larger horses in separate areas to avoid any tangle in the lower bars of the fence, and forbidding the use of canes.