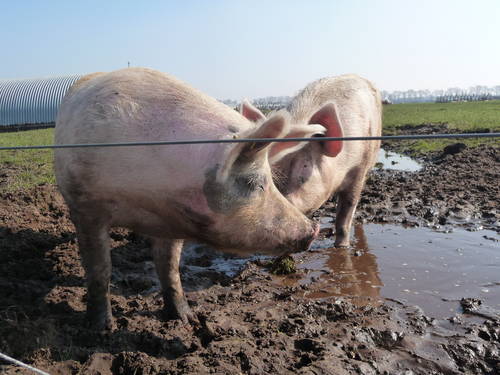 Eyes on Animals visited an organic pig farm where pigs, including mother sows and their young, are housed in large outdoor shacks and given plenty of access to the outdoors to perform much desired natural behaviours, such as rooting, mud bathing, sunbathing, and nest building. The farmer was a lovely Dutch man who had seen this sytem while working in England and found the animals happier and thus wanted to try it out in the Netherlands. He admitted that on a dry day the pigs had a terrific life but that in the cold wet months there was room for much improvement. Unfortunately Dutch soil is wet and not high in calcium, so the piglets especially can have a difficult time coping and are more prone to worms. Nevertheless, Eyes on Animals sees that this system has potential to become ideal, whereas confined systems (small barren pens and crates) have no potential in ever becoming truly welfare friendly as they totally limit the natural behaviour of the pig, one of the most curious and intelligent creatures on the planet. If wet countries like Holland wish to continue being such big pig producers, perhaps they need to find a solution that accomodates animal welfare and their bad weather? Such as keeping pigs in group straw housing indoors during the winter, and outdoors with small shacks during the summer?