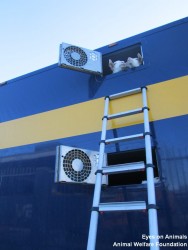 Our team received news that two trucks with Dutch animals on board have been stuck at the Turkish border since yesterday morning. Van Dommelen, transporter of two consignments of pregnant goats and some bucks for the organizor Van Kooten, did not stop at a control post in Bulgaria as planned to rest the animals and drivers. The trucks instead went straight to the Bulgarian/Turkish border, passed the Bulgarian controls and were now being blocked by the Turkish officials due to problems with the paper work. The animals were loaded in Ijsselstein last Friday, January 30th.

Apparently a few of the male goats are above the maximum age permitted for import into Turkeyand 2 of the animals do not have ear tags that match the Health Certificates. How this happened and did not go noticed by the organizor and NVWA before the animals left the Netherlands, remains unclear. We sent a team to the Turkish border to check that the drivers were at least doing their best to provide for the animals blocked inside the vehicles, and to inquire further from the border authorities what was going on. Fortunately the loading density was very low, because they were high-value pregnant goats. The temperatue outside was also not extreme. Nevetheless, one of the trucks only had tiny access holes and if the trucks have to wait a long time, the ammonia from the increasingly dirty bedding plus the lack of feed and other facilities in the border, can aggravate conditions. We will keep our eyes on this situation.