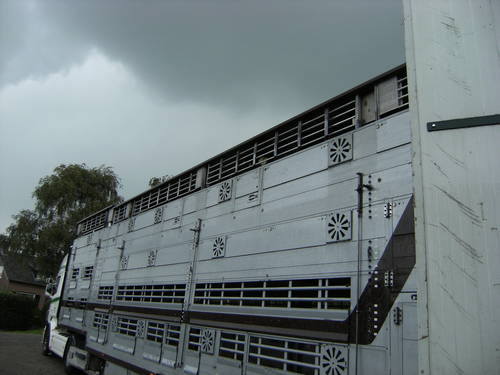 Our focus has been on inspecting the welfare-problems of cattle transported on double-deckers. We therefore stopped by the Verhagen cattle collecting station where we were told many cattle are exported from. When we arrived, pregnant heifers were being loaded onto a double-deck truck from the Spanish company Maitxene. The cows were destined for Spain. The owner welcomed us in. He said that he doesn’t export animals for slaughter, only ones for further production and therefore more care is taken into how the animals are transported. He makes a point of selecting the smaller cattle to go on double-deckers and the tall cattle are loaded on single decks. This he does “to ensure they all have enough room to stand up naturally, have proper ventilation and avoid any back injuries during the long journeys”. His stall was very clean with lots of fresh straw. The cows were being fed and all appeared in good condition.

Eyes on Animals has filed an enforcement request with the minister of farming, nature, and food … END_OF_DOCUMENT_TOKEN_TO_BE_REPLACED