Lesley, head of inspections and coordinator of Eyes on Animals, was contracted out by Animals’ Angels to organize a training course for 75 French police and gendarmes in department 19 in France. Six official veterinarians also participated. In the morning Lesley, together with PMAF, explained the EU animal-protection-during-transport legislation so that the police and gendarmes could enforce the welfare law. Afterwards, three control-points were set up near Tulles and all passing livestock trucks were stopped and thoroughly inspected.

One truck was from the French transport company “Alliance Porc Sud”. On board were “slaughter” pigs that had already been on board for 6 hours and were heading to a slaughterhouse in Rodez, another 2 hours away. The top floor of the truck was horribly overcrowded, more so than Lesley had ever seen in her 10 years experience. There was a layer of three pigs lying on top of eachother, from floor to ceiling. 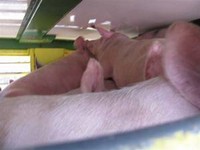 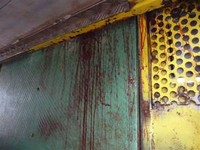 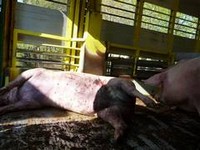 There was blood dripping from the side of the vehicle. As a result the police and gendarmes fined the chauffeur €450 and made him order a second larger truck to unload the “excess” pigs into (28 pigs had to come off!). During unloading we sadly observed one dead pig and another one which had difficulty walking due to an injured leg. The official veterinarians are sending a letter of warning to both the transport company’s boss and to the farmer, who apparently pressures the driver on a regular basis to load so many pigs all at once (and threatens that if he doesn’t he will lose his contract). As well, they will inspect the physical premise of the transport company and together with the police and gendarmes keep a closer eye on them in the future