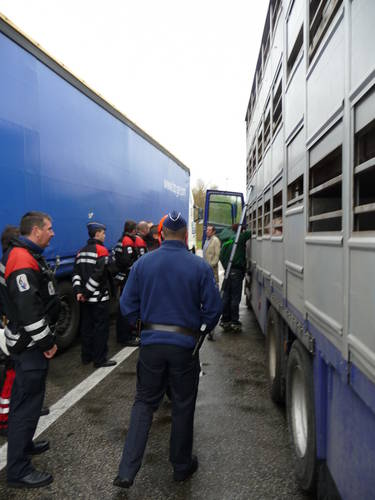 Eyes on Animals offered a theory and practical training session in the Dutch language to Belgian police officers from all over Flanders. The training ran from 9am to 5 pm. During the morning EonA inspectors gave a presentation on the EU animal transport legislation and in the afternoon a control point was set up along the highway and all livestock trucks were stopped and checked by the newly trained police officers with assistance from the EonA trainers and an official Belgian veterinarian. Each police officer was also given an EonA training manual to assist them in the future when conducting livestock truck inspections on their own. With the police involved, there will be more “eyes” on animals and the sanctionning systems for not abiding to the EU transport laws protecting animals can finally be applied.

This little calf was all alone on a large truck that was stopped during the practical training. The importer didn’t want him because he could not use his hind legs well, so he was refused and sent back to the collecting station. The police and official veterinarian took action to ensure that the owner and collecting-station manager knew that what they did was wrong and there will be a follow-up inspection of this calf to be sure he was medically-treated or humanely euthanized.