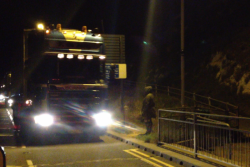 News from our UK colleague working on the ground in England and according to UK official document WIT09, the Dutch livestock transport company De Jong had loaded live sheep in the UK on September 10th despite a panel on the side of his truck being broken. As a result, the leg of a sheep was stuck in the gap and risked injury. The De Jong truck was attempting to board the Joline ship at Ramsgate, UK to bring the sheep to the continent. The UK authorities were alerted of the problem and noted down in their complaint that repair was needed to avoid further injury to the animals. The suggestion in the official letter was that de Jong should unload the sheep immediately upon arrival on the continent and that the truck be repaired before being used again. Eyes on Animals is disappointed that De Jong and his driver took the risk of loading live animals on a vehicle that posed risk of injury. Livestock vehicles are to be designed to protect animals from injury and should at the very minimum be in good state before loading animals in the first place. Sadly our UK colleauge also never received a reply from De Jong about her concern and inquiry about whether he had the repairs done.