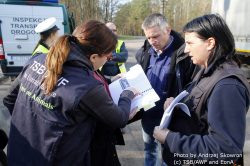 Today we stopped and inspected 6 livestock trucks during our practical training course for the Polish authorities. The welfare of the animals, the condition of the vehicles and the transport papers were checked. The pig trucks only had minor infringements related to incomplete transport papers. The poultry truck had the same problems as we still too often see during poultry transport: many birds had their wings and other body parts trapped and crushed from being loaded quickly and brutally, the cages were poorly maintained and the truck was equipped with an unsuitable curtain. 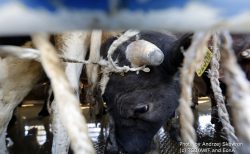 The cattle truck we stopped also had many infringements that lead to poor welfare- bulls were mixed with cows, hornless animals mixed with ones with horns, some were tied on and others not, and some were even tied on by their horns which is painful and illegal. The divider in the truck was also unsuitable. The ITD and Official Veterinairans present during our training are now taking appropriate actions against the transport companies found in violation. We would like to thank all the participants. Via these training courses, Eyes on Animals expects that the legislation to protect animals from suffering will be better respected and that bad transport companies causing suffering be eventually weeded out.

Eyes on Animals has filed an enforcement request with the minister of farming, nature, and food … END_OF_DOCUMENT_TOKEN_TO_BE_REPLACED