On January 15th, Eyes on Animals gave a training course to the police from the region of Gent (Belgium) on the European animal transport legislation. On January 25th we held the first practical part of the training, and today, the second practical part took place. At 4am a control point was set up on the highway and all livestock trucks passing by were stopped and inspected. Ten national trucks were stopped in total. Four of them were in violation of rules set up in the EC 1/2005; one for not having the paper documents in order (but the animals on board were fortunately in adequate condition), one for not having an indication on the back of his truck that live animals were on board; one had a lonely calf on board and the sanitary conditions were very bad (the truck had not been cleaned and manure and urine were leaking out from the many rusty holes in the floor) and one for not providing adequate headroom for the cattle. Several cows on this double-deck vehicle had their backs rubbing against the ceiling and could not hold their heads up in a natural position. The police ordered that the cattle be unloaded onto single deck vehicles and have written a statement of offence against the company. When the animals were being unloaded we noticed that the tallest cow already had an open wound on her spine. It was a case of poor animal-welfare. During an inspection of a pig truck, we observed a pig with his leg caught between the bars. Fortunately we managed to release the leg. 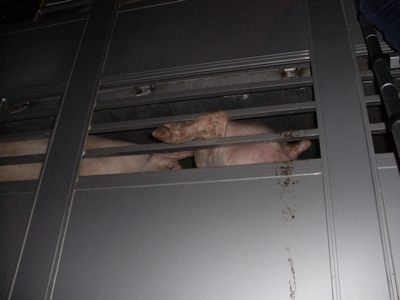 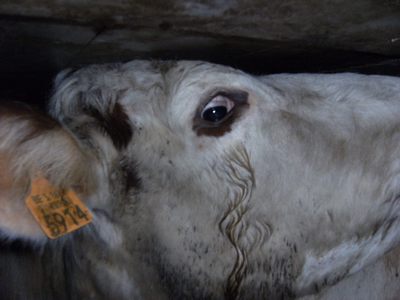 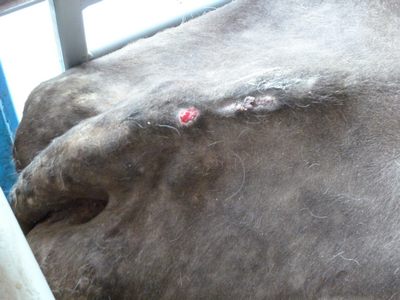 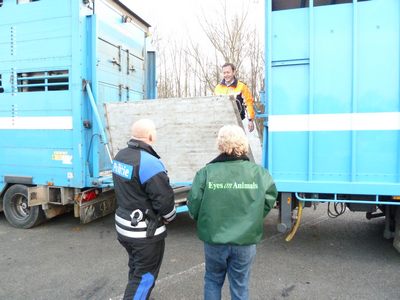