Eyes on Animals received several complaints from people within the transport sector concerning Vion in Tilburg. They claim that double-deck trucks not providing enough headroom for cattle were being regularly accepted causing unfair competition for companies that were trying to respect the “10cm above the withers” regulation. In the morning we observed 7 double-deck cattle trucks drive into the slaughterhouse. Three had enough headspace or had only loaded cattle on the lower level, but 4 were indeed in violation because several cattle had their backs touching the ceiling. We asked to speak to someone from the plant about this concern and were received by the director of production. He explained that this was the responsibility of the official veterinarians to enforce but agreed to bring this point up at their next meeting together. We unfortunately could not talk with the veterinarians at the plant today and were asked to instead contact the main office of the VWA in this region of Holland. We would like to thank Vion for taking the time to meet with us and will check that these problems have been solved. 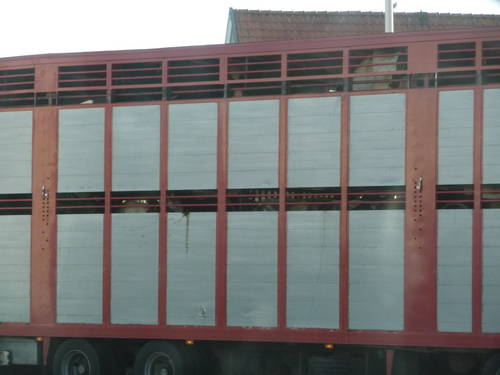