Home » Our inspections » transport » Meeting with the EU commission and FVO 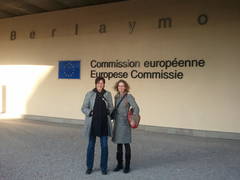 Eyes on Animals, Animal Welfare Foundation and Compassion in World Farming requested a meeting with the European Commission to further discuss what action was needed to put an end to the suffering of animals on board EU trucks heading into Turkey. We were invited to come today.
Present were 10 officials from the Commission, Sanco legal affairs, and the Food and Veterinarian Office (FVO) as well as 2 representatives from the European Livestock and Meat Trading Union. After the main problems at this border were highlighted, we suggested actions we feel are necessary for the authorities to take in order to reduce the suffering. It was agreed on that the EU Commission will 1. meet with the Hungarian and Bulgarian authorities about the trucks in violation coming from their countries (the biggest exporters to Turkey) and insist that they enforce the law properly before export is approved and also at the border crossing 2. They will write a letter to the Agricultural Ministry in Ankara (Turkey) to liaison with them on how they can reduce the long-waiting times at the border and communicate more effectively their exact import requirements, and 3. Show support to Ankara for building a stall at the border so that injured or sick animals can finally be treated or humanely euthanized, and animals blocked due to document or import-requirement problems can be unloaded and properly cared for. Before leaving the authorities made it clear to us that our reports and photos have alerted them to the grave situation and that they are taking our complaints very seriously.