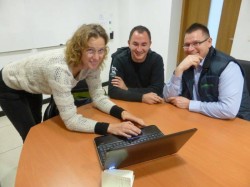 Hunland is a large animal transport and export company. Their main office is in Hungary where they also have a huge farm. Here cattle (Hungarian and from abroad) are fattened and many are then exported to countries like Turkey, Russia, Egypt, Israel etc…

The purpose of our meeting was to exchange ideas and info about current trade routes.

We showed them what happens to many animals inside Turkish slaughterhouses and ask them if they, as an important export and transport company, could spread education and influence positive change inside the slaughterhouses of the countries where they export animals to. They were shocked by the footage and said they will talk to the leaders of the company to see to what extent they could help.

We also discussed the transport of animals by their ship to places like Egypt and Israel and expressed our concern for how animals are further transported and slaughtered once they arrive there. They always have one veterinarian and crew people from their company that accompany the animals during the ship voyage to oversee animal welfare, but it remains a problem to still have control over what happens to the animals they export once they arrive to the importer in the country of final destination. They do however give advice to farmers in the importing countries, when the final destination is a farm. But slaughterhouses is a new idea for them. 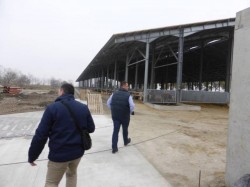 We also visited their farm, with over 1000 bulls. Conditions were clean and good. The animals made a calm and healthy impression, although it is unfortunate that they do not have much room to properly walk around. The feed rack was set rather low, leading to some animals developing rub marks on their neck. We will send them photos from a good farm in the Netherlands we visited that has replaced metal rails with thick rubber.

As usual, we would like to thank Hunland for the open and constructive talk and look forward to having them getting involved in helping raise the notch of animal welfare in countries they export to.

Eyes on Animals has filed an enforcement request with the minister of farming, nature, and food … END_OF_DOCUMENT_TOKEN_TO_BE_REPLACED