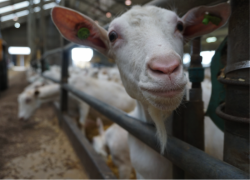 The lobby letter that EonA wrote and sent to the Dutch House of Representatives (in preparation for the General discussion on animal-welfare on February 7th) resulted in Minister Schouten promising a critical dialogue about the future of the goat-milk industry and factory farming in general. Other topics that were discussed during the General discussion where the CO2 stunning of pigs, the rough catching and loading of poultry and ritual slaughter.

The lobby letter that EonA wrote can be read HERE (only in Dutch).