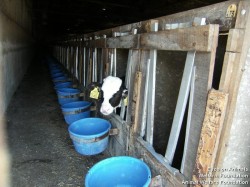 On May 20 2014 an Eyes on Animals/AWF team was in Hungary and tried to make a follow-up check on AGRAGCOOP, a large farm/export centre that in 2012 still housed young calves in individual wooden crates, which were banned by the EU back in 2006!

In 2012 during our first unannounced visit we were told by the owner that they will stop housing calves like this by 2013 but we need visual confirmation ourselves before we update the EU with our report.

The farmworker told us that she could not let us in without the boss’s permission.
We are still waiting for his answer 2 weeks later…