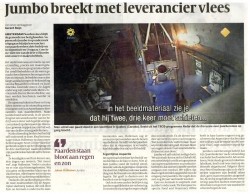 After Eyes on Animals, TSB Zuerich and AA USA released their investigation results on Tros Radar TV show indicating serious mistreatment of horses during transport and slaughter in Argentina and Uruguay, Jumbo sent their own team to these countries to investigate. Despite Jumbo announcing their visit to the slaughterhouses 3 days ahead, they still came to the same conclusion as we did regarding Lamar slaughterhouse in Argentina- abuses were taking place and horses were suffering. Jumbo has decided to stop doing all business with their supplier that was buying horse meat from this plant. Previously, half of the horse meat sold at Jumbo was coming from Lamar slaughterhouse. Unfortunately Jumbo is continuing to do business with the two other slaughterhouses in these countries, claiming that these plants needed improvements but outright abuses were not found. Eyes on Animals strongly feels that all import from these countries should stop as the local government controls are corrupt and the national welfare laws are either non-existent or very poor.

Eyes on Animals has filed an enforcement request with the minister of farming, nature, and food … END_OF_DOCUMENT_TOKEN_TO_BE_REPLACED