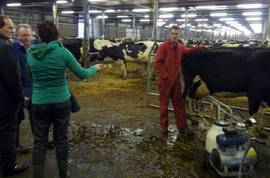 Eyes on Animals inspectors made an unannounced visit to the famous cull-cow market in Leeuwarden where three years ago downer cattle were being regularly delivered and dragged onto trucks using chains. Eyes on Animals was relieved to see that the improvements the market managers made since, are all still in place and that they have even built a water system. Every cow has access to water, there are long water troughs directly under the railings where the cattle are attached to (see photo above). Numerous cows had full-udders but their hired “milker” was busy milking them with a small milking machine. There were no downers, but looking at all of them one has to question if the entire Holstein genetics is not doomed as these animals all look skinny and exhausted after just 3-4 gestations. Many cattle had leg injuries due to their housing systems, so called “bed sores” from lying in their stalls which are often too short, and swelling at the joints from walking on concrete. Two cows were not fit for transport, one for not being able to put any pressure on her back right leg, and the other because she had calved just 3 days earlier. A veterinarian was called in to euthanize both. A combi team of 2 inspectors from the AID and the VWA were present and checked carefully the animals. We were informed that a combi team is present now every week. The attitude of the market managers was friendly and open to us, showing the right attitude to continued progress in increasing welfare standards. Their future plans are to raise money in order to install a better ventilation system to reduce ammoniac levels.

Many dairy cows are sent to slaughter after just 3-4 calvings because of reduced milk production. Like many others present, this cow had a swollen hock and long hooves, showing that her “farmer” did not take adequate care of her well-being at the farm. 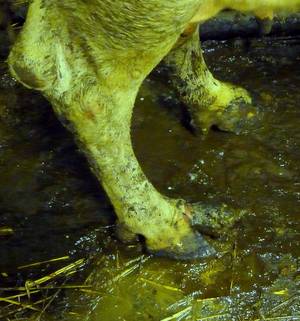 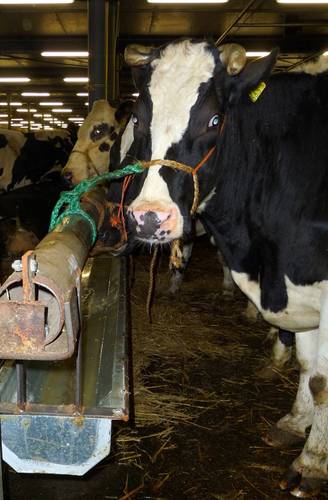