Home » Our inspections » market » Inspection of the new cattle market in Purmerend, NL 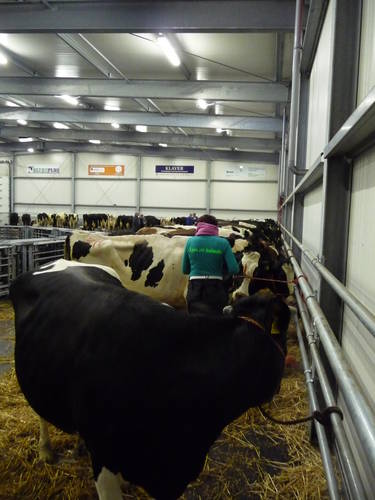 Eyes on Animals visited the new cattle market in Purmerend. Present were approximately 65 culled “dairy” cows (culled means that they were selected, for various reasons, to leave the farm and go for slaughter), a young bull and a steer. Although Eyes on Animals does not promote markets and believes the that the journey to slaughter should be as direct as possible, we were impressed by this market. Despite the cows being “culled” and from the Holstein race, they appeared in much better condition than those we observed at the Leeuwarden cattle market last week. Two were slightly laming, but we did not observe any with swollen joints or bed sores, nor any that were extremely thin. It seems that the dairy farmers in Northern Holland send their culled- cows to slaughter “on time”, instead of waiting until their condition greatly deteriorates. There was straw on the floor where the animals were tied. The environment was very calm, without any hard hitting. Only a few cattle bellowed, a good indicator that they were not overly stressed or nervous. The market managers still need to install a water system, for the moment they water the animals with buckets which is not very handy. They say they are working on this. An inspector from the AID was present to ensure that the animals were fit for transport and properly handled during loading.