Eyes on Animals was permitted to participate and inspect the loading of pigs at a farm in Zeeland onto two transport trucks belonging to the company Vaex. The pigs were destined for a long distance journey to Slovakia and to Italy. Eyes on Animals assisted in the loading to see for ourselves how it could be done calmly and responsibly,without screaming or hitting. The employees handled the pigs correctly and there was very little squeeling or panic among the pigs. Two pigs were quickly identified by Vaex for being partly lame and thus were not loaded to avoid potential suffering problems during the long voyage. 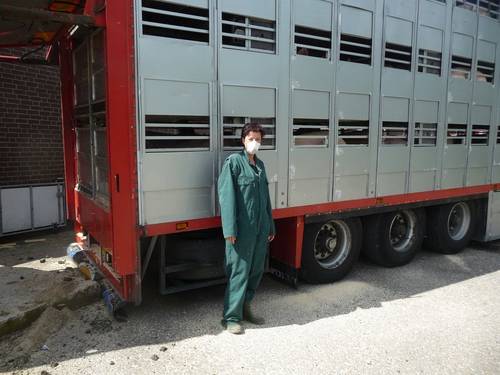 Eyes on Animals thanks Vaex and the farmer van Genugten in Zeeland for being open towards Eyes on Animals and for taking measures to reduce stress during loading and transport.

Although Eyes on Animals is in principle against the long-distance transport of animals, we very much acknowledge companies that are at least trying to do things in a responsible and law-abiding manner.