On the night from June 9th to June 10th, a team from Eyes on Animals was on the roads in the Netherlands to check on the welfare of animals bring transported to slaughterhouses in the dark hours. We inspected a truck, loaded with approximately 6000 spent-laying hens, that was parked at a gas station in Brabant. Many of the transport crates were partly broken, which is very risky as they could eventually cave in under the weight of those stacked above. The temperature outside was cool, and yet no tarp had been placed around the crates to block the wind. Most shocking was that one hen had her wing trapped in the door of her crate, crushing it. She was left hanging there, in what must have been excruciating pain. The driver was nowhere to be found, and thus we had to take action ourselves. We managed to open the door and release her wing and give her emergency help. We will send our photos and report to the pertinent authorities, and insist that action be taken. Little care was taken in how these animals were loaded and transported, and as a result they suffered. This is against the law.

“Ann” had the door slammed shut on her wing.
The pain must have been excruciating.                  Many transport crates were partly broken. 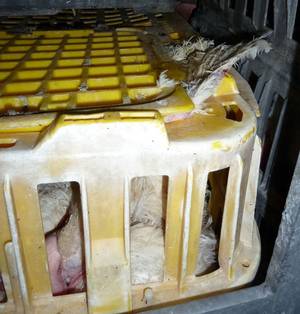 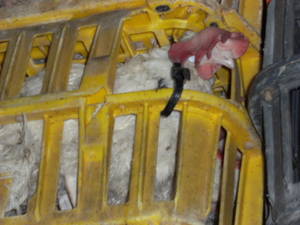