A concerned passerby of a parked trailer loaded with piglets called Eyes on Animals to ask for some help. She was concerned because the piglets were screaming loudly. When we arrived, we observed many piglets badly fighting eachother; biting eachothers’ ears and face. As a consequence, some were covered in bloody scratches. After awhile the chauffeur returned, in a loaded truck, to pick up the trailer. The piglets were destined for a short journey. 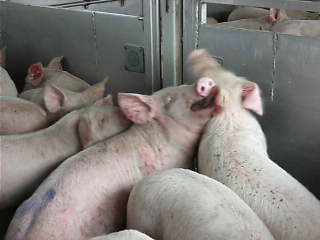 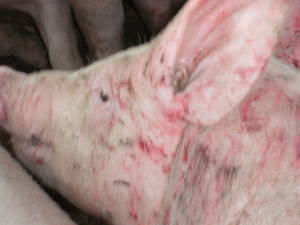 Eyes on Animals did not witness any clear violation to the EU animal-protection during- transport laws. Nevertheless, the welfare of the animals was at that moment very poor. Fighting of piglets is an inherent welfare problem of the livestock transport business- when a truck is standing still and unfamiliar piglets are put together it always leads to stress and suffering for the animals.

Eyes on Animals has filed an enforcement request with the minister of farming, nature, and food … END_OF_DOCUMENT_TOKEN_TO_BE_REPLACED