Home » Our inspections » transport » Inspection of a pig collecting station

During the 35-40 degree hot weather today, Eyes on Animals was checking on the welfare of animals being transported to slaughter or for further fattening. We therefore also dropped by an export collecting center where pigs are grouped and sent for export after being checked by an official Dutch veterinarian hired by the VWA. We were shocked to hear that the VWA had already approved two export trucks that morning, and another two in the late afternoon. Nevertheless we did acknowledge the efforts the collecting station made to keep the animals from overheating at least while waiting at their center. One chauffeur unloading sows did so in a very calm manner, and a worker had poured some water on the floor of the pens for them to lie in. We were also allowed to join in and pour water on the sows and give others a bucket of water to drink and splash around. However, even in the shade and water puddles inside, many of the sows were panting quickly and appeared very uncomfortable from the heat and the stress of being moved and transported. 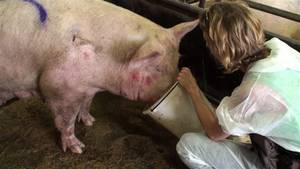 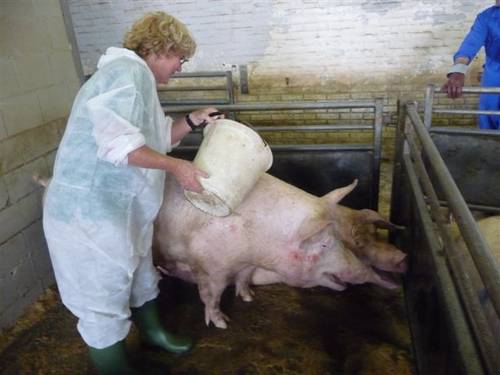