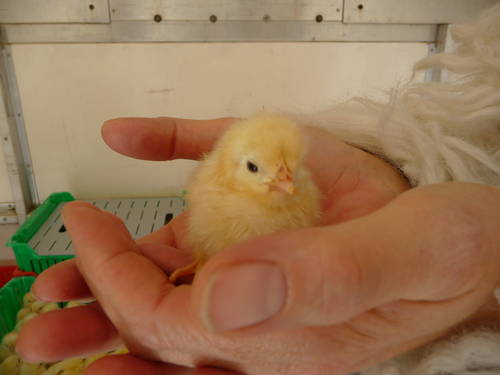 One of the surviving chicks, roughly a dozen died from the accident. While parked at a highway rest stop, Eyes on Animals investigators spot a truck with new-born “broiler” chicks loaded in cages. There are a dozen dead chicks and the cages are not stacked up properly but appear to have fallen. The driver explains to us that he forgot to attach a belt around the cages to prevent them from falling, and while driving someone tried to overtake him and he was obliged to apply the breaks very suddenly. As a result the cages went flying and many birds were injured. The surviving chicks that were seriously injured and suffering were killed by him by breaking their necks. Eyes on Animals will keep their eyes out on this problem and alert the police inspectors during our trainings to also check on the placement of belts on the transports of small animals in crates.