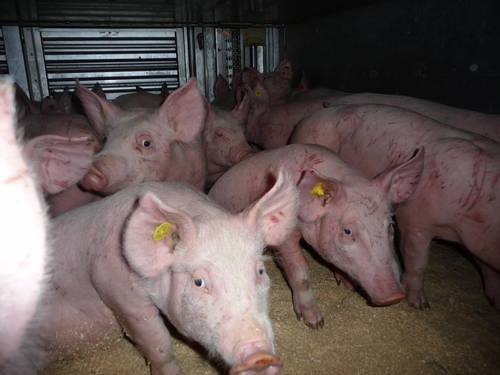 Eyes on Animals investigators spotted a Dutch livestock truck from the company Van Rooi in Germany. It was loaded with Dutch piglets. We called M. Van Rooi at the head-office to ask that he have his drivers stop so that we could inspect the animals, the condition of the truck and the transport documents. M. van Rooi agreed and a few minutes later the truck stopped. We were most impressed- the piglets had plenty of room to lie-down, sit and walk around to get to the water nipples. There was a thick layer of bedding on the ground, which many were rooting in. Although it was impossible to check each piglet properly, our general impression was that they were in good condition and mobile. The water system was in full-working order, even on the top level where usually the pressure is much weaker. We would like to thank M. Van Rooi for being so cooperative.