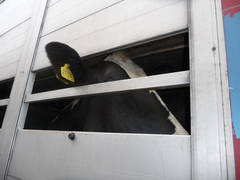 An Eyes on Animals team inspected a double-deck lorry from the Dutch company Erik Tax (from Veewaardigvervoer!) parked at a gas station on the A50. Inside were Holstein cows with Dutch ear tage. Several had their backs touching the ceiling above. These animals were not given enough head room, leading to limited ventilation and discomfort from not being able to stand upright in a natural position and risking that they wound their backs. In the Netherlands, double-deck lorries for cattle are discouraged for tall bovine breeds, and if used all cattle must have at least 10cm above the withers. The floor of the truck was very dirty, as if the animals had already been on board for a long time. Liquid manure and urine was pouring out from the back of the truck. The chauffeur was not present at the time, so the team called the AID (Dutch animal and animal- product police) to notify them about it. This complaint is now going down in their administration system and we will send our report with photos in to the pertinent Dutch authorities.