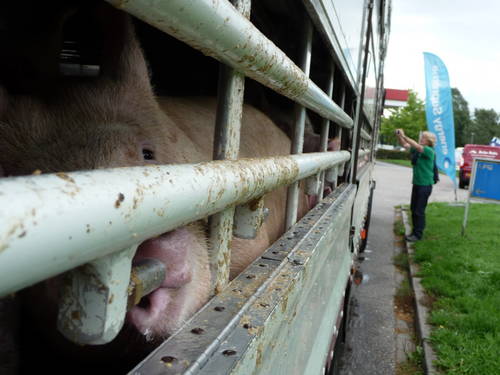 Eyes on Animals inspectors checked on the loading conditions and truck quality of a pig transport destined for a slaughterhouse in the Czech Republic. During a driving break, the chauffeur turned on the water-system and the pigs on the first floor began to drink and appreciate it. However, water was not coming out of the nipples on the second and third floors, leaving the pigs above with no chance to drink. We showed the driver this problem, and he very politely began to fix it. Shortly thereafter water started coming out of the upper nipples, however with very little pressure… We insisted to the driver that he always check on all the nipples to be sure they work, and that should the water pressure remain low that he bring the truck in to the mechanic. 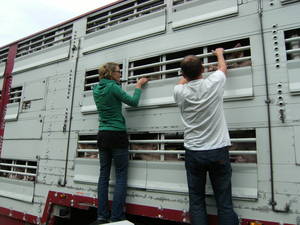 Eyes on Animals illustrating that the pigs on the upper floors were not getting any water. Although the pigs were just at the beginning of their voyage, they were already thirsty. All of the nipples were occupied!