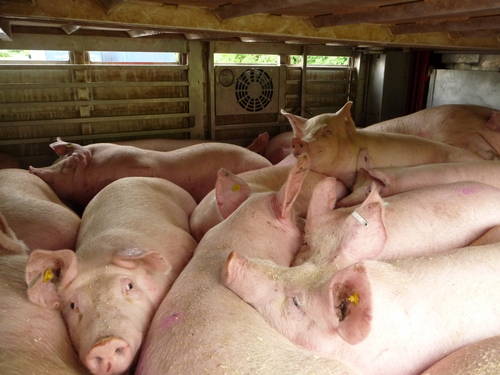 Eyes on Animals trailed a truck with Dutch pigs on board destined for a slaughterhouse near Budapest, Hungary. While driving through Germany it was stopped by the police so that the papers and condition of the animals could be quickly checked. We checked on the pigs on each level. The water system was turned on and some pigs were drinking from it during the inspection. They were calm, nevertheless they appeared at their maximum loading density. On the papers it was written that the pigs had 105m2 of space, but later when back in the office we checked the RDW internet site and found out that this vehicle only has 95,48m2! We will send a letter to the VWA authorities and make sure that this company no longer falsifies their documents regarding loading space!