On November 2010, Eyes on Animals inspected the annual Horse Market in Hedel for the first time and found a series of practices which were unacceptable. After much consultation, promises were made to make this market less stressful for the horses and ponies.  In early November 2011 the annual market was held again, and we were present. The situation was much better than last years. 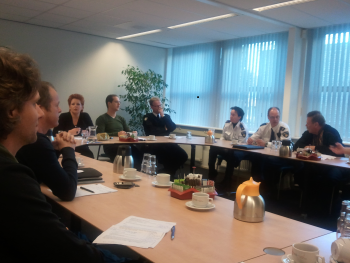 Today we were invited to meet with the organizers of the market, the police and official inspectors from the Ministry of Agriculture to evaluate this recent market day and discuss any further concerns we had.

We expressed that certain factors still need work on- namely that some animals are still placed too close to the loud noise created by the bars and fair attractions, that still too many animals were tied on too tightly, limiting them in being able to eat or lie down, and that many traders did not take advantage of the free hay and water available to give to their animals. We proposed that next year they no longer place any horses in front of one particularly loud café, and that they hire several young people to be in charge of distributing hay and water to the animals, to set a good example for the traders and to ensure that all animals are cared for.  We also encouraged that the law enforcers not be so hesitant to hand out fines to those tying on their animals too tightly.

We were told that our suggestions would be taken into consideration and next fall, closer to the date of the upcoming market, we would meet again to confirm the possible improvements.