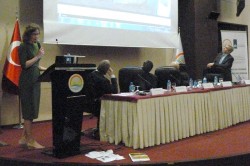 Today EonA/AWF team was invited by the Turkish and Dutch Ministries of Agriculture to give a talk at a seminar they organized together on how to improve farm-animal welfare. The seminar was held at the Ministry of Agriculture in Ankara, Turkey. The team would like to congratulate the organizers of this seminar and both countries for coming up with such a brilliant idea of sharing best-pratice ideas and learning from one another. Roughly 100 veterinarian-inspectors and government officials from Turkey and the Netherlands were present, as well as the Dutch Embassador to Turkey, some livestock-industry representatives from both countries and us NGO’s. We gave a talk showing some serious concerns we had regarding installation design, handling and restraint of animals inside five Turkish slaughterhouses we had been to in 2013/14, and gave some ideas of how these problems could be minimized. We also showed some small improvements that several slaughterhouses that we worked with had put into place, our on-going efforts and our plans for the near future. 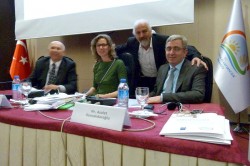 Despite some people in the crowd taking a slight offence for showing negative photos, the general attitude was that “we had woken up a sleeping giant” and that action will need to be taken. We also learned more in detail about all the hard efforts the Turkish government and individual officials had been busy with to further improve the situation- namely that in January they published animal-welfare-during transport legislation and are now busy drafting animal-welfare-during-slaughter legislation. Indeed, drawing up legislation is crucial and a lot of work, so we would like to acknowledge this very important achievement. We understand that without legislation and an accompanying sanction system, it is hard to enforce improvements, so this first step was very important. At the end of the conference the Dean of Ankara University announced that he would like EonA/AWF to give a lecture on animal welfare to his veterinarian students.

In the evening the speakers and Ministry officials were invited by the Dutch Embassador for dinner at his Embassy residence where we had longer one-on-one talks and discussed further cooperation and ideas with the other guests. This seminar was a stepping-stone towards better animal-welfare for the future and positive cooperation. 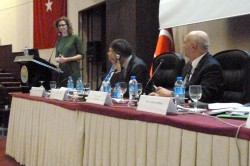